Skirmishers seem to be one of those tricky things in Napoleonic gaming. I've seen them represented as separate units, attachments to regular infantry, or even abstracted off of the table altogether. In Over the Hills you're given a few different options, with dedicated light infantry battalions that can deploy in open order and with a 'Skirmish Rating' that regular battalions have, representing the skill of their attached light infantry company. 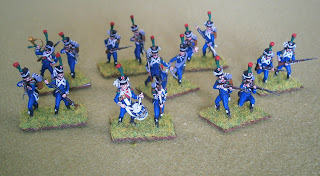 I quite like this idea in theory (although I've yet to really test it in practice), as it seems like it can represent the way skirmishers were used to both advance ahead of the force as a whole and contribute to fire fights between individual units. To that end I've painted up a pair of four-base battalions of Chasseurs (representing around 400 men each). These guys have only two figures on a base to make them look more spaced out. 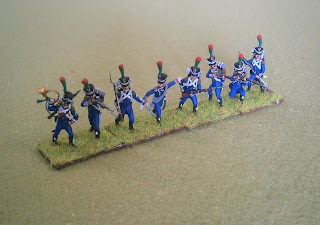 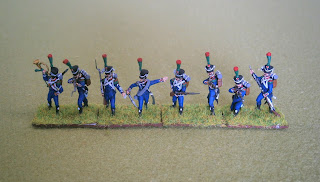 The models aren't strictly Chasseurs, but rather come from Zvezda's excellent Voltigeur set (Set 8042). I decided on doing these guys as Chasseurs because HaT do excellent sets for Light Infantry Voltigeurs and Carabaniers, so some time in the future I'd like to add an extra base to these units from each of those sets. Being Zvezda they, of course, painted up very well (in my humble opinion). 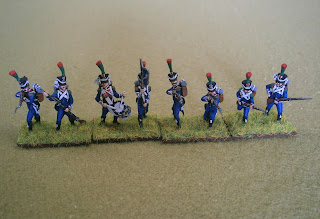 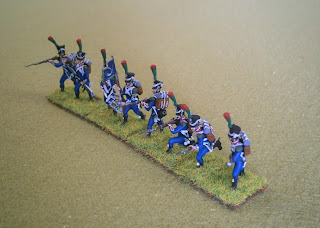 Most of the other figures from this set were set aside to be painted as Voltigeur companies for line battalions. I should have posts on those up in the coming weeks. 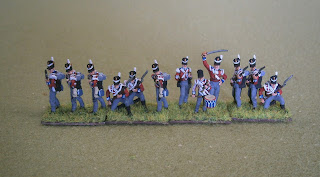 And here are a few British to cap things off. There were hardly enough here to justify giving them their own post, so I figured I'd tag them onto the end of this one. The infantry are from Italeri's British Infantry 1815 (Set 6095). If I'm not mistaken these particular figures are Foot Guards, so they'll be needing a few more bases in the future to get them up to full strength (six more, as it happens). For now they can stand in just fine as regular line infantry. 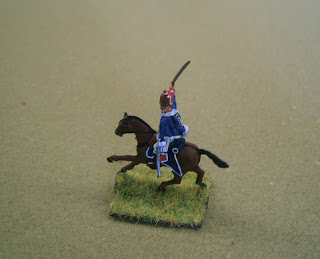 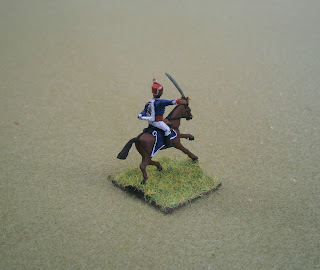 This mounted figure is a hussar from Airfix's Waterloo British Cavalry (Set 01743). He was floating around alone in one of my miniature drawers, so I've painted him up as a kind of cavalry officer (or else an aide de camp, if I ever need any).
I've been a little slack on posting updates, but I have actually been getting stuff painted. I'll try to catch up on my backlog a little over the next few weeks.
Cheers!
Posted by The Lord of Silence at 23:33