A look inside Halo: Ground Command, Battle for Reach 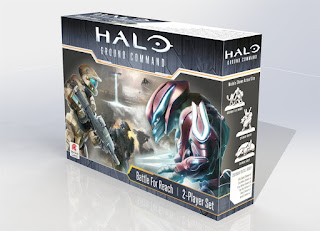 I recently experienced a day that I was assured would be important by almost everyone: my eighteenth birthday. While the day itself didn’t prove to be much more than a pleasant day spent with my extended family, I did receive a certain gift that got (and still does have) me very excited.

Several months ago my dad mentioned the new game Halo: Ground Command that was coming out as a sister game to space based Halo game Spartan Miniatures already had. He suggested that I might like the starter set for my eighteenth, and I said something along the lines of “that’d be okay I guess.” I then proceeded to forget about the event nigh on completely until a week ago when I sat down at the dining table to open this year’s presents.

Naturally I was both astonished and delighted to find that Halo: Ground Command, Battle for Reach was among them! 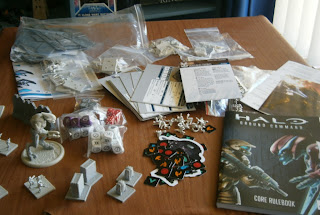 The minis themselves are of reasonably decent quality I’d say, although the casting in some cases leaves a little to be desired. The number of models is very satisfactory, with the set including 35 marines, 36 grunts,  5 elites, 3 SPARTANS, 2 warthogs, 3 ghosts and 2 hunters. On top of this are all of the standard materials needed to play the game: rule book, dice etc.

One of the more interesting things in the set is that it includes a fairly sizeable amount of terrain. An assortment of smaller pieces that look as if they’re likely to serve as objective markers or minor cover (I’ve only given the rules the quick once over so I’m not too sure how the system works yet) are included, all based off of various things which can be found within the original game.

The really cool part for me though was the two UNSC bunkers the set has. They’re modelled to blend excellently with similar structures from the game Halo: Reach. While they do initially give the illusions that they are snap together, I was a little disappointed to find that this was not the case, and that glue will most certainly be required. I’m a little bit iffy about the printed textures for them, as I would really have preferred to paint them myself, but the images of the finished models that I’ve seen imply that they’ll still turn out looking pretty good. In the end though I may still pull them apart and paint them myself but we’ll just have to see.

The little bit of assembly I’ve done so far has proven to be a bit, difficult. All of the models have ample numbers of offshoots that need to be trimmed, and the weak nature of the grunts’ knees means that I’ve already got two snapped limbs to deal with. Regardless, the two units I’ve gotten based up thus far (one of marine rifle men and one of grunt minors) look pretty nice, and have me itching for the end of the school year.

Now, enough discussion, let’s have a look at the models themselves.


On top of all of the stuff I’ve talked about so far, the set also came with this fine fellow. He stands at an impressive 8cm tall, this resin elite is really a very lovely model. While I can’t fathom how I’d ever use him in a game, he should make an excellent display piece once I can find the time to do him up. 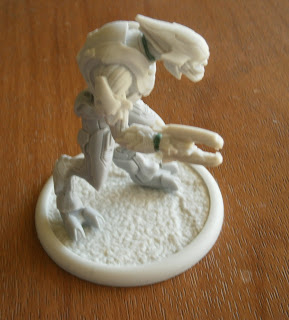 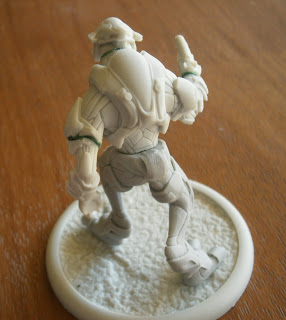 All in all I’d say the set is a pretty cool, albeit somewhat expensive one. I think I can safely recommend it to anyone who’s curious and has the extra cash, though if you’re tight on hobby money you might want to direct your funds towards more familiar investments. Interested to see how these guys paint up, and I’ll be sure to let you guys know how they come out.

Hope you enjoyed this little review of mine and I hope to you’ll consider stopping by again in the future.