As promised (though not as soon as I promised) Quatre Bras. The Battle of Quatre Bras was one of the two engagements that took place before the famous Battle of Waterloo (which was actually at Mont St Jean and Plancenoit, but no one really seems to care about such small details). The battle was fought between British and Allied forces under the command of the Duke of Wellington and French forces under the command of Marshal Ney and of General (not sure about that rank) Reille. The Combat was of course centred around the settlement of Quatre Bras, where Wellington had begun to recentralise his forces, after initially preparing to gather at Nivelles to the west. The French attack foolishly did not begin until 2pm in the afternoon, as Ney had the entire morning wasted away doing practically nothing at all. By this point the British were ready to defend against the attack.

The scenario I played through with me myself and I (other players for me are an extremely rare commodity) is not totally accurate to the actual numbers and forces at the battle, but I like to think it gave the right idea. The rules were simple: you role dice to shoot at people and move models around. I wasn't really using an official rules set, but was more just going with the principles I knew from the many other rules sets I've read in the past. Thankfully I can get away with this easily because there is no one else participating in the game. Of course when I play with someone else I make sure I stick to the rules, otherwise my friends tend to get a little annoyed (probably with good reason). 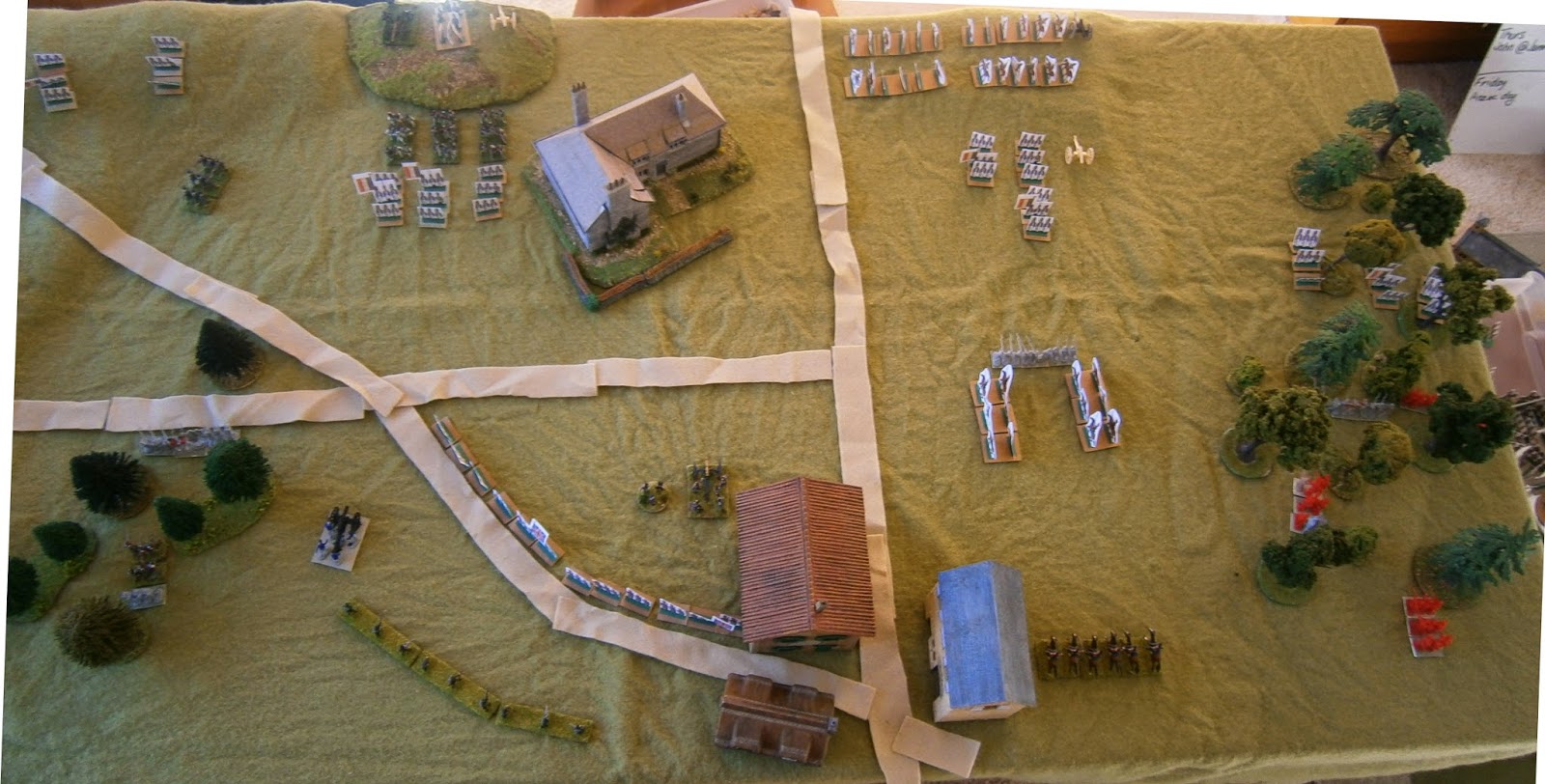 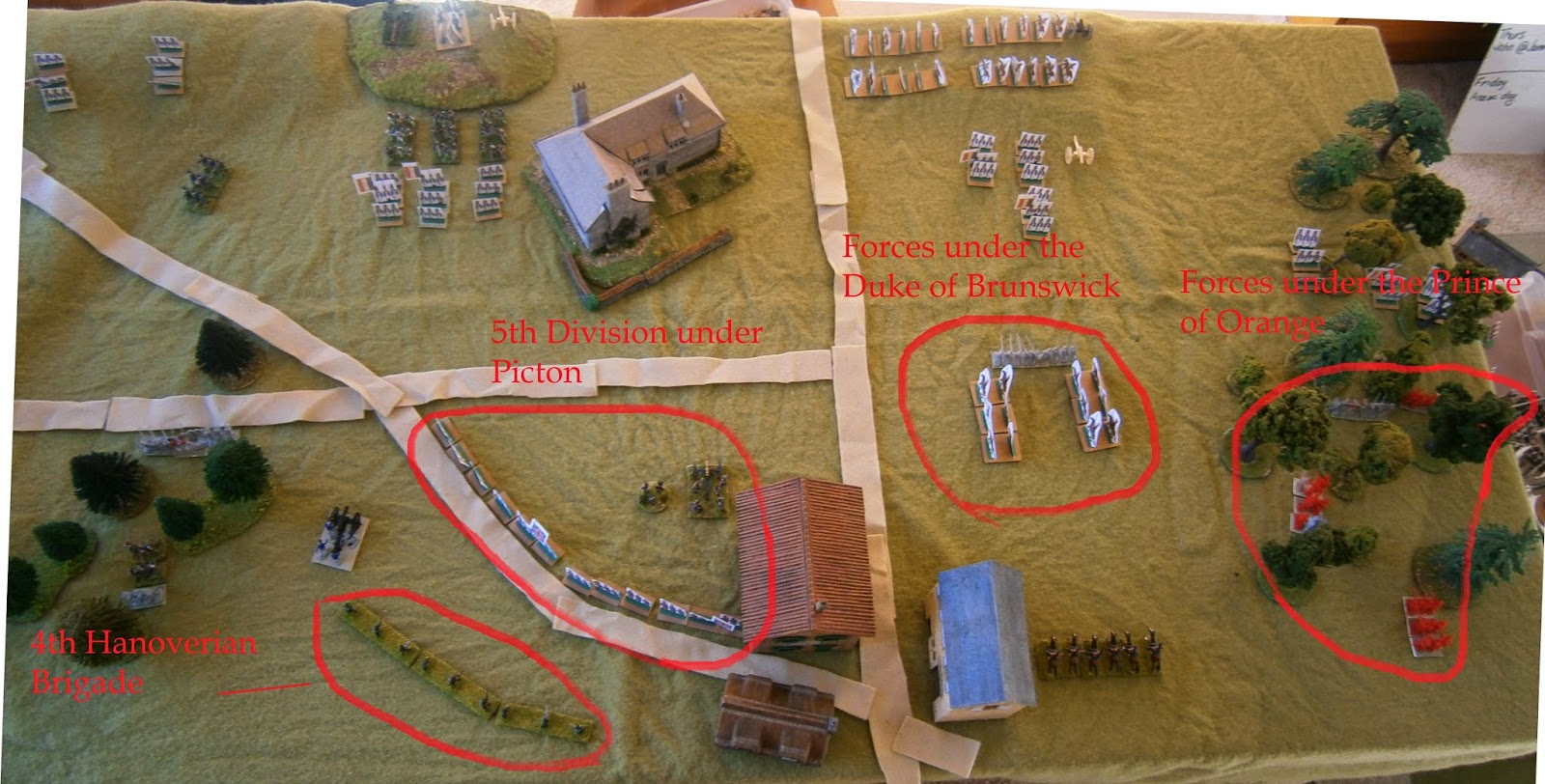 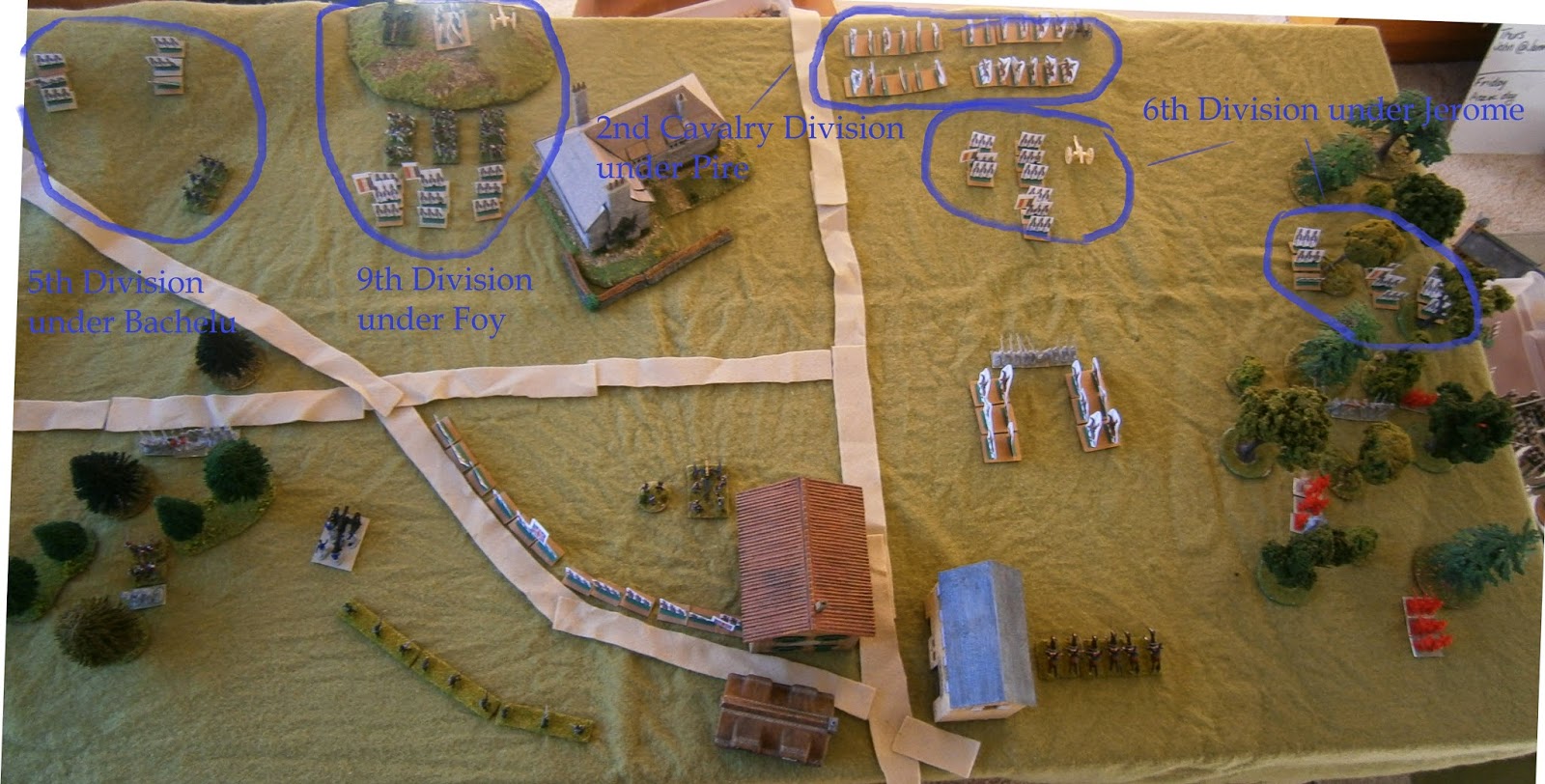 So, thus the layout is given, and the battle begins.

﻿
﻿
﻿
﻿
﻿
﻿
﻿
﻿
As the sun began to dip behind the dark shadow of Bossu Wood, Marshal Ney gazed out at the battle lines. Cannon smoke still drifted over the vallied area, and the cries of dying men hung in the air, so thick that the French commander thought that if he was to sweep his hand through the air in front of him, he would be able to pick them up in his hand. "Not quite the results we were hoping for eh?" he asked of Reille, who was seated on his own horse just behind him to his right.

"The Emperor will not be overly pleased about this you know. Still, last I heard Ligny was turning out to be a rousing success, those Prussian barbarians were running like rabbits; hopefully his mood will be lightened."

"If you don't mind me saying so sir, I can't help but get the feeling as if things were supposed to go a little differently today."

Ney gazed out at the battlefield and pondered Reille's words. When he spoke, he was only partially sure of his own words until they came out. "No, I think not. It do not believe this could have gone any other way really."


There you have it﻿﻿ ladies and gentlemen. I have finally finished up those loose ends I said I would. Now I can put up something for my next project! Though knowing me it will at best not be for another month or something like that. But anyway, I will do my best, I'm just glad I got this done. Hope you enjoyed this battle report, until next time good luck and Godspeed.
Posted by The Lord of Silence at 22:46 4 comments: