German sdkfz and musings on the Tau empire 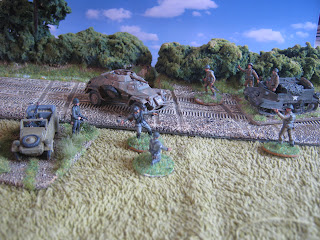 Hello again everyone!
These last two weeks have been rather unproductive for me (miniatures wise). But I do have this to show for it. My German sdkfz 222 from the Airfix German recon set.
It had been lying still undercoated on my painting desk for months while my attention was drawn away to other things.
But I have experienced a bit of a lull at present and so I decided to finish this off.

But no more preamble, the pictures: 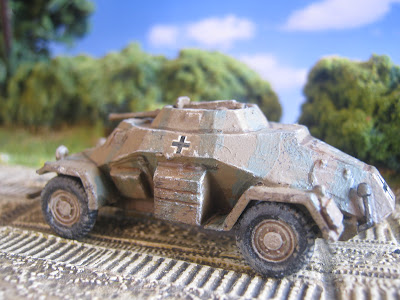 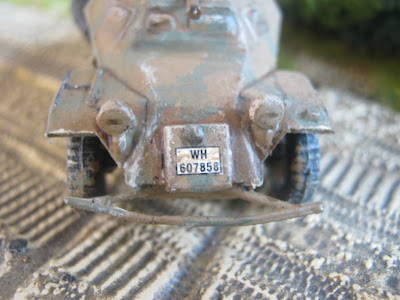 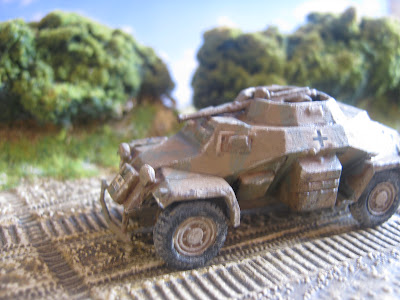 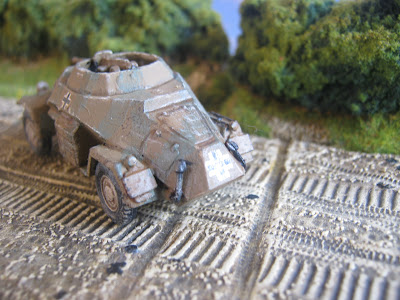 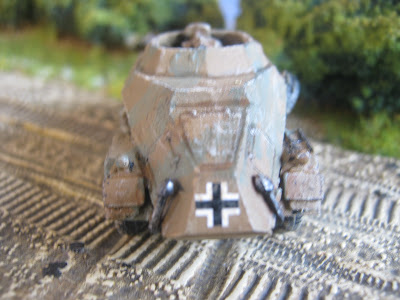 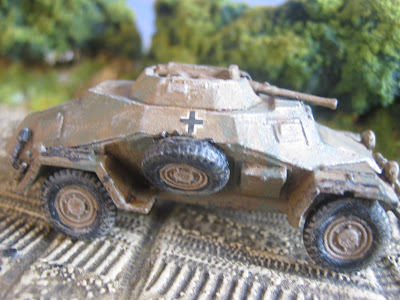 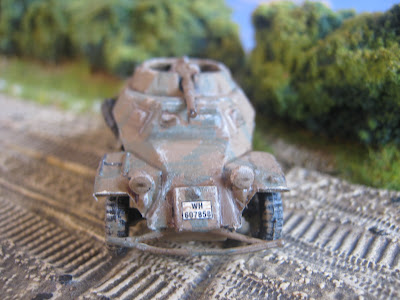 Now for a little rambling....

As the image below tells I have been most taken up with an obsession with the Tau empire. No, not because the codex has been re released, though that has helped, I was already interested in the Tau before that, in fact they would have been my choice for an army in Warhammer 40000 had I not chosen the Necrons due to fact that they were a cheaper alternative. 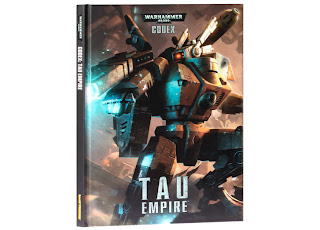 But now that I have established a 500pt Necron force ready to rise from the depths of their tomb worlds to wreak havoc on the galaxy, my mind turns to the one faction that can truly be considered 'good guys' in the dark 41st millennium.
I have taken to thinking of the Tau as the only true light in a starless sky. They are the only race I know of in 40K who uses diplomacy frequently, and only goes into battle as a last resort if a planet will not be convinced to join the Empire and receive the Tau's technological benefits.


True enough they aren't without their stains on their backgrounds and tactics but they are as good as your going to get in 40K. And of course there are many other things about them; their awesome technological forms of combat and their wide range of diverse mercenaries which allow you to have a lot more room to work with than the other factions.
And with new codex released Tau are suddenly brought to GW's hobby forefront and a number of new miniatures have been released along with the new codex. So I am finally considering adding a second army in to my Warhammer 40000 collection.
I do have two more reasons for wanting to get hold of a Tau army. One of the foremost being that I have only one opponent; my friend Zac H who collects the green tide of orcs, who I may point out, so far have not swept over the ancient Necron wall of steel and blazing gauss weaponry.
But unfortunately these two defeats seem to have slightly discouraged him even though I think that they were both mainly due to either the Necrons being too over powered or just plain dumb luck. So I am now in earnest to get another army so that I can game with more variety. The other being that the tau encourage me; I didn't know how dark the 41st millennium was until I entered it and now I feel I need a race who is truly as I said earlier a light in a dark place.
But even though GW have done a generally good job with the Tau I was happily browsing away through their on line catalogue of miniatures when I found this: 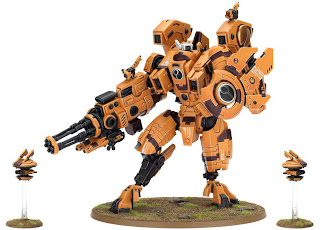 A Riptide battlesuit. Now I don't mind a nice battle suit every now and again but this one is just going a little too far for me. It's about four or so times the size of a fire warrior with a truly enormous pair of arms, a head that is far too small for me and legs that I'm sure couldn't really hold it up.
I know to most people I'm probably just making a big fuss about nothing and I do still think it looks cool but I just think the proportions could have been a little better. I do think though that only people who have too much money would have one of these; $90 in Australia not counting the postage, I'll never have one of these within ten years since I can't hope to afford it at my current financial state of $10 a week if a do the gardening.
Oh well, I do on the other hand hope at one point to have the valiant warriors of the greater good appearing on my own blog but for now all I can do is save my money and make hundreds of imaginary plans which more than likely will not ever come to be.

Anyway next week I will be putting up a post which is most defiantly off the beaten track from wargaming. But I think I will leave that as a surprise.
Cheers!
Sarge at Arms
Posted by The Lord of Silence at 22:57 3 comments: